The Part We Play 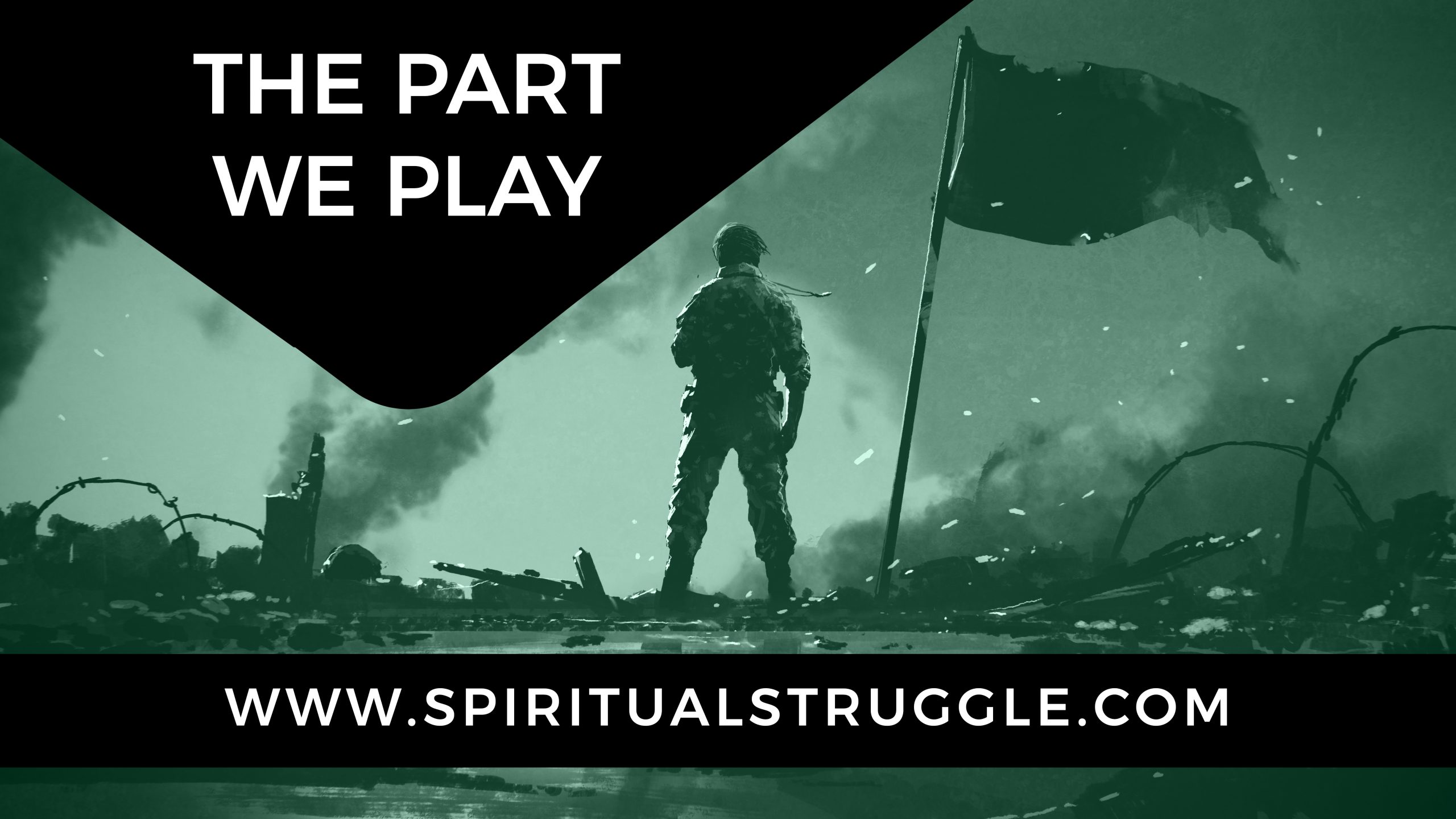 Why Spiritual Warfare Affects Us All

How do you view the spiritual realm?  Do you imagine an invisible world of angels and demons battling around you for the souls of mankind?  Maybe it’s the stories you hear told about the last days or end times on Earth and the stories you read in Revelation.

And how do you imagine that you—or do you?—play a part in it?

Many might say that you can’t play a part in it.  That it’s beyond our abilities.  Or perhaps that the only real tool we have is prayer.

It’s incredibly important to define and understand just what the spiritual realm and the war happening there really is, in order to truly understand the world we live in every day.  Here’s the most important point: Humans play a critical role in the spiritual war that goes on every day around us.

We’re a center point of the thing.  For some reason humanity is the reason there’s a spiritual war going on, and, while it may be a topic for another day to say why, its sufficient to say that the state of humanity is of the utmost importance to the powers of the spiritual realm.

Another thing to say directly is that there are very important ways that people play a part in the battle.  As I touched on earlier, some might think that I’m talking about prayer here.  But in this case, no.  It’s not through prayer that we play the part I’m about to discuss.  Instead, I’d like you to think about what the different spiritual powers want.  Or more specifically what the powers of evil want.  The truth there is that they’re mostly happy to let us pray.  As long as we pray without knowledge, direction, or power, focused on our own wants and desires, these evil powers are fairly content.

What they want is to destroy our souls – but they also want us to serve them.  And, generally, mankind is a willing army.  You won’t see many people out there honestly and fully committed, saying, “Hail, Satan,” but you will find a great many doing his work.  Many do it completely unknowingly and with good intentions (you know what they say, right?), and in this way members of the Church aren’t immune.

So how do we do the work of the evil ones?  Well, it’s simple and complicated all at the same time. We spread and believe lies – sometimes we propagate those lies because they’re something we absolutely want to believe and seem good – we’re selfish and lazy.

We tear others down rather than building them up.  But even more often we build them up in the wrong ways.  We teach things that seem good but have the seeds of their own destruction built directly into them.

These are the kinds of things we need to pray against.  We need to be sure that we’re not tearing down, spreading lies, or teaching falsely.  And herein lies a second conundrum: How do we know that we’ve received an answer to that prayer that’s true?

Maybe you hear from God directly to every one of your prayers.  That sounds like the kind of thing we all wish we had: to know for certain the answer to our prayers.  But the truth here is where the rubber really meets the road in spiritual warfare.

The powers of evil know people really well—nearly perfectly, in all likelihood.  In wanting to destroy us, they’ve followed the fundamental axiom of “know thine enemy.”  They know just what to whisper in our ears (so to speak), what people to put around us, what circumstances to which to expose us, and probably a great many more tricks than that.  They know what we want to hear, but they also know that we’re not likely to listen to them if they’re just making promises.  They know that we’re likely to doubt, that we’re skeptical and expect to be cheated.  They know how to craft and tell the story we need to hear to do what they want us to do.

If we let them – if we’re ignorant to their intentions – then they can absolutely beat us.  The war may be won—Christ has indeed triumphed over death—but we can still loose many battles at a high cost.

Does it matter that we lose the battles along the way if Christ won the war?  The evidence would indicate so.  After all, why leave the world as it was after that greatest of victories if there wasn’t more to do?

It doesn’t seem right that people were meant to be left to flounder around on their own as the battle really starts to heat up.  Those spirits of darkness are working every moment.

And how are they working?  To enlist armies for their cause.  Armies of us – men and women.

It’s a battle that has front line soldiers fighting for evil virtually out in the open and others who are spies amongst us who spread false messages.  On all sides we’re fighting an insurgency.  It’s in our families, our jobs, and even, and maybe especially, our churches1 .

The war is happening everywhere and yet we’re blissfully willing to go along with the world as it seems.  Why?  Is it easier?  Perhaps.  Because we’re taken with the worldly things?  Probably.

Is it because that’s the story we want to hear?  I think that’s part of the war that’s going on more than anything else.  That’s part of the danger of the message that “Christ has already won the war.”  First, it’s true, and we always at least think we operate from a place of truth.  But second, based on that obvious truth, it’s easy to say that what happens afterward doesn’t matter and blissfully ignore what’s going on around us, thinking that it can’t hurt us. The less we’re aware of the war that’s going on, the more the enemy can win.  The more war crimes that can and do happen.  The more likely we are to become casualties ourselves.

If you don’t know that the battle is about to overtake you, you won’t take the appropriate precautions.  And, what’s worse, you might be fighting for the other side without even knowing it.  You see, the forces of evil are more than willing to lie in order to kill and destroy.  The forces of good (God) are only willing to use the truth.  And for some reason, the truth is completely unpalatable to humans.  We reject it because we think that it can’t be.  It doesn’t fit into our world view.  It doesn’t square with our experience.

This is part of the reason that this war in the spiritual realm is so focused on our world, the human world.  Because it has the unique factor that the truth can look like a lie and lies are more palatable  – in some ways more true and believable – than actual truth.  The “shades of grey” we all have to live with daily provide fertile ground on which to battle.

For this reason, it’s very unlikely that the powers of evil would ever or often expose themselves as they truly are.  They would rather operate in such a way that no one would believe that they exist in the first place.

The preference, at least as far as warfare is concerned, is to be completely invisible, allowing it to appear that we are doing all the evil in the world and that they had no part in it.  If we can deny their existence, we will fail to fight against them properly.

And in some ways, that’s absolutely fine since some of the weapons we have to use against them are actually the gifts of the spirit.  These gifts work to completely disarm the lies and deceptions loaded into our fellow man.  It takes the ability of them to kill and destroy completely away.

This is where the fruits of the spirit come in.  Have you ever stopped to wonder why, after they’re listed, Paul goes on to say, “against such there is no law”?  The obvious answer would be that you can’t legislate against love, or most of the others.  While that might be true, I think it’s also important to realize that this means that these things are primary.  Maybe it’s worth thinking of them as the spiritual building blocks of the human world.  In that way and through those elements, we have a chance to short circuit the powers of the enemy.  Against those things they have no power.

In the end, the part we play in the Spiritual War around us is constant.  It goes deeper than just prayer.  It’s more than just the authority we have as followers of Christ.  It’s a constant vigilance, an understanding of the enemy, and a recognition of the fundamentally spiritual nature we all possess.